In the heart of London lies London Media RFC, the club was formed approximately 20 years ago by a group of friends that all worked in the Media industry and currently they play their rugby in Surrey 3 and Surrey Conference 4. On Wednesday evenings, in the middle of Clapham Common, the club gather together to put in the hard yards before their weekend games and this Wednesday I had the pleasure of visiting them with Everything4Rugby’s Tom May. 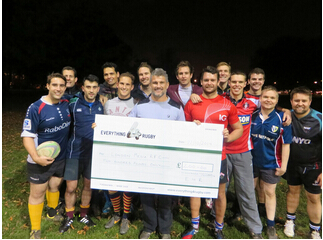 The purpose of Tom’s visit was to deliver a £200 cheque to the side for they were the winners of E4R’s recent social competition. After greatly receiving their prize I spoke to club member Vincent Walker to find out a little bit more his side and just how such a donation will help them;
“We run two squads and are pretty hopeful for the season ahead; both have won two, lost one so far. From a financial perspective we rely on members’ subs and we try and keep those low because it means that more people can play so having a cheque like this is really handy. £200 may not seem a lot to some but it is almost as much as we’ve spent on our kit for the whole season, we'll certainly be having a full squad meeting to decide on how to use the funds.”

Everything4Rugby’s aim is to bring together and provide support for grass roots and club rugby in the UK and Ireland and it was clear from speaking with Vince that this goal is being realised on the ground;
“As we are an amateur club, we are always looking for sites that provide a lot of information and information that that you can’t get otherwise. We don’t have a nutritionalist; we don’t have physiotherapists or PTs so it generates a lot of interest when you get something that is a one stop shop with information on these areas. It is a massive resource, I’ve been on there a lot over the last couple of weeks and have been pushing ideas to other people in the club. For example there are even position specific materials for half backs, second rows, front rows; all of that sort of stuff is really great and so helpful to us as amateurs.” 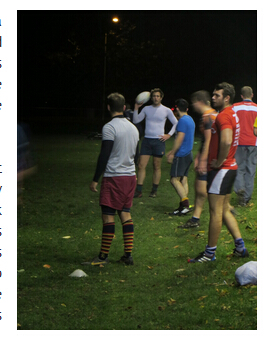 Seeing London Media RFC train, on a dark night under the borrowed floodlights of Clapham South Tennis Courts and hearing how much they value the site that he and his colleagues have created was great for Tom;
“I’ve never really heard anyone that isn’t in the detail of Everything4Rugby talk about the site so to hear Vince talk to you about how much value he is getting from E4R was brilliant. This is what we want to be doing, we want to be providing guys like this who love the game as much as we do as professionals with all the information that we can.”
I quizzed Tom regarding whether or not this was a one off donation or something that will be continued by Everything4Rugby in the future;
“We are going to have a lot more competitions and whilst the first one happens to be in London I could be sending this cheque to somewhere in Wales, Scotland or Ireland. Everything4Rugby is not an English only website it is for every amateur rugby club in the UK.”
It was clear that Vince and all the guys at London Media RFC are already gaining a huge benefit from Everything4Rugby and I must stress that their gratefulness to E4R was genuine; it wasn’t staged or made up just because Tom was there, it was real. They say that the proof is in pudding so if you are part of an amateur club allow me to suggest taking London Media’s lead and finding out exactly what Everything4Rugby can bring to your side.